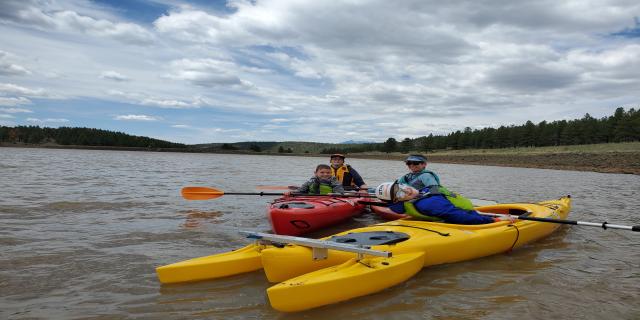 Letter from Monica and Keegan Evans

My son Gio will turn eight in two weeks. His journey has not always been easy. Gio loves Minecraft. He can tell you all about the different types of Minecraft and loves dragon fire. He loves dinosaurs and from a young age could tell anyone who would listen that the stegosaurus has an extra basal ganglia in its tail. Gio was three when we started noticing his difficulties with socialization and interacting with his peers.

My husband and I have always loved the outdoors but because of Gio’s difficulties with sensory processing we have not been able to go outside. The wind, heat and change in environment are especially hard for Gio. Gio loves the water and he loves to swim in pools however Gio gets anxious around large bodies of water. This last year he begged to go to the beach but for the whole week refused to touch the water. After we received his diagnosis a friend told us about NAAS and how they were having kayaking and hiking lessons. We were thrilled!

When we told Gio he was excited but as the actual day approached he became very nervous and wanted to cancel. The first lesson as we drove out to lake Mary he kept saying “I don’t want to go in the water. What about the waves? I am scared. I won’t do it”. When we arrived Truman and Sue already had the boats set up . Soon Alex and another family we know arrived. They helped Gio with his life jacket. He stayed away from the boats and told Truman he was nervous. I did not think he would go out on the water that day . Both Truman and Alex got on his level and spoke with him about his fears. Just like that they convinced him to ride in a tandem boat with Truman. Gio asked me to go with him. As I followed them in the kayak I watched Truman talk with him, joking, finding his interest and making him more comfortable on the water. Before we knew it Gio was paddling and asking to go further down the lake. He even asked me to share his kayak and we got to paddle and play on the water together. It brought me so much joy, even though it was windy, sunny and chilly he was outside and enjoying himself. Meeting new people and making new friends.

For a mother of an autistic child who has already struggled so much in his life this was absolutely amazing. Now Gio looks forward to his lessons every week. He is still nervous when we first arrive but is able to overcome his fears more quickly each lesson. This last lesson he even went alone with Truman and a volunteer. As I write this we are getting ready to go out on Lake Mary again with Truman. Gio has been talking about his kayaking lesson for the past three days! It is beautiful to have him so excited about trying new things and meeting new people.

We are incredibly thankful for this program and what it has meant for Gio! We can’t wait to see his continued progress and love for the outdoors grow! Thank you NAAS for teaching our son. Thank you for your patience and understanding. Thank you for providing a place where Gio can be himself and try new things. Thank you for all you do.